HomeBlogBlogWhen “Values” is more than a Word – The Mitsubishi case

When “Values” is more than a Word – The Mitsubishi case 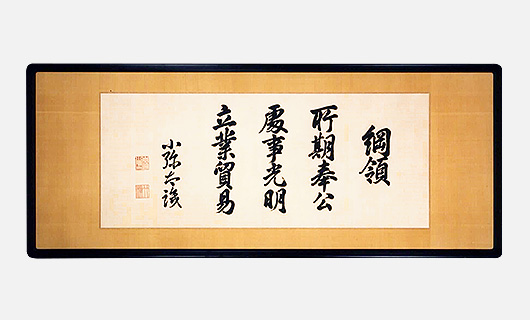 Having been lately pleased to work along with Mitsubishi Electric, Hydronics and IT Cooling Systems I have come to know the Company quite well, and with it the history of the Mitsubishi group of companies too. I have been particularly intrigued by the history of the group, which becomes very peculiar after World War II.

Not that the Mitsubishi Industries were not a very relevant group of businesses even before, with interests spanning across many very different fields.

The group, founded by Yataro Iwasaki in 1870 as a small shipping enterprise was at the end of the 1930s a powerful network of industries that was part of the backbone of Japan’s economic (and military: the famous “Zero” fighter plane was built by them) power.

However, it is after the defeat of Japan in the war and the subsequent occupation by the allied forces that things began to take a unique turn.

The occupying forces compelled the big Japanese industrial conglomerates to split up and pulverize after the war, in a transparent attempt to cripple Japan’s strength for a long period of time and prevent any temptation to rise again in revenge.

This took the former Mitsubishi powerful group to split into hundreds of smaller companies that did what best they could to manage a survival strategy.

After the political situation calmed in the ‘50s with the final peace treaty and the grip of occupying forces waned, some Mitsubishi companies began to regroup in bigger organizations, although they mostly remained independent from one another. And yet… Here our story gets intriguing.

Despite being at the time, as well as today, different companies with separated businesses, markets and areas of influence, many of the companies were hoisting the sam flag and representing themselves by the same, three diamond logo. Others that had shed it, took it on again and so did with the name Mitsubishi. You might expect that such a situation, in the highly competitive global business environment, would beget golden opportunities for lawyers in endless disputes about the ownership of such a prestigious trademark.

In the Mitsubishi case the situation gave raise to a revived communal spirit and birth to bodies that had the aim to protect the Values of the Mitsubishi heritage: the Mitsubishi Foundation and the Mitsubishi Corporate Name and Trademark Committee. Today the many Mitsubishis existing independently as corporates submit themselves to the authority, mostly moral but with some powers to enforce its decisions, of this entity with the purpose to perpetuate the Company’s original body of ethics, represented by the three core Values, and “assure the proper use of the mark to preserve and reinforce the Mitsubishi identity”.

Here are the three Values at the core of the Group’s ethics, as you can find in the common “Website of the Mitsubishi Companies” (http://www.mitsubishi.com/e/):

After about 140 years since the foundation, and more than 80 years since their best known formal articulation by the Company’s 4h President, such principles are still at the core of the many Mitsubishis existing.

I am sure that you can see by how far the history of these Values pre-dates the CSR movement rise. This must be the reason why in – at least some of – the Mitsubishi Companies sustainability in all its three dimensions is so deeply understood and embedded in the core values and strategies.

Whatever the case, I am fascinated by the very idea that corporate executives and boards, made of people who I am sure are not naive tree-huggers but excellent and modern business people, accept the supervision of their strategies and operations by a third party, which is essentially an ethics committee. With the peculiar extra power of ruling over very different, autonomous subjects in order to assure a common ethical imprinting and behavior.

Observing the historical performance of the Mitsubishi galaxy, reborn like a phoenix from the ashes of WWII and thriving in multi-faceted forms today, one cannot help thinking that Value-driven business strategies must be a very good choice to consider for a corporate. There are other case histories of success in business begotten by adherence to Values despite pressure from the short-sighted: the Post-it of 3M is one, brought to life because of the commitment not to produce items containing toxic glueing material. Interface, with its astounding performance towards the 2020 Impact Zero Mission – and today’s Climate Takeback initiative – is another.

But the Mitsubishi case stands out because of its peculiar structure, formalized and well identified as an independent party having authority over third subjects.

One may say that Japan’s culture is a world of its own. Yes, but ain’t any culture a world of its own while notwithstanding this fact we are constantly learning from other cultures what they have best to offer?

Therefore I think that there are lessons to be learned from this story: first and foremost that putting Values at the forefront of a corporate’s strategic priorities pays back generously in the mid-long term.

The same as with Values applies to sustainability, which not by chance is among the priorities that the Mitsubishi that I know better, Electric, Hydronics and IT Cooling Systems, has in its strategic approach. With its Vision 2050 the Company is among the most thoroughly engaged in the pursuit of a sustainable economy, with ambitious business, social and environmental objectives. Which makes it a subject with whom discussing Embedded Sustainability comes easy and excitingly constructive, whereas the wider corporate landscape is not as encouraging.

I am sure that more engagement on sound Values, with integrity and a long term vision about the creation of shared Value would benefit a whole lot of companies across all industries.

While benefiting all of us and the ecosystem that we need in order to survive and thrive.