HomeBlogNewsLeadership is about giving more than you take

Leadership is about giving more than you take 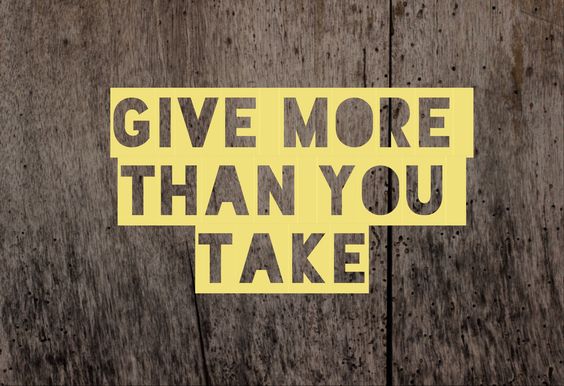 Today I wish to celebrate one of the most important traits of an excellent leadership. The opportunity has been stimulated by a former student/mentee of mine who just a few days ago sent me the image of his “Teacher’s diploma” of a personal development school that he attended for five years. Along with the pic of the long sought-after certification came a recorded message thanking me for having had a part in his becoming what he is today. He goes on to say that he knows he has worked himself hard to accomplish, but then he goes: “Well, you know where I was when I started…”. Yes I know, and I remember very well the path that we walked together.

I also know that today he is a capable leader in his field, and a conscious leader of himself. This story is not relevant as a celebration of my own accomplishment, which is insignificant: it could rather be of my student’s, but it has triggered some reflections. Although this particular relationship is not of leadership in an organization, my feeling is that is has nonetheless to do with some of the same issues. One of these is the balance between giving and taking, and the ever unresolved  comparison between a leader and a boss.

I remember reading somewhere the definition of a great leader as one who makes more leaders. I agree, in a way. What I agree with, as a starter, is that a leader has to be free from fear that his people become more that him/her and consequently does not hinder their development. Unfortunately this is something that happens quite often. Some organizations, especially the big and the financially oriented ones, or those linked to politics, even foster this kind of behavior making their work environments extremely competitive – and unhealthy. This is a common error that comes out straight from the business schools, where quite often few of the teachers are from the field and even less from the world of SMEs, where the truest work relationships are formed. What happens in these organizations is that people spend the majority of their energy guarding their backs and trying to make sure that no one will outperform them, or stand out compared to them. This is the culture of fear and distrust that dominates many inefficient work environments. This is the breeding ground of bosses.

If you are free from fear, you will instead foster the full expression of the potential of your people, and you will benefit the most from their contribution to your achievements. If some of your collaborators have the predisposition to become leaders, as a first thing they will take some burden of responsibility off your shoulders, by taking initiatives. They will be stimulated to exercise their creativity and this will add to the scope for innovation and unusual solutions to problems of the team. Indeed, such culture is especially beneficial for the organization and is facilitated when the circulation of information, the sharing of the vision, mission and objectives, the people’s development policies are more widespread and encouraged. These are the most efficient and better performing organizations.

As a second thing, I think that a leader must have a vision/mission that is engaging and is developed or at least improved along with his/her people. Maybe there are some very few individuals who are capable of generating a broad new vision for the World on their own. However, my experience tells me that there are two factors that encourage the sharing attitude: one is that more brains add scope to a project, the other is that people who have partaken in forming vision and objectives are more engaged in pursuing them. They also develop a broader vision that makes them higher performers in their own specific areas of activity. People who have participated in the process of developing “visions” have a clearer perception of what is the purpose of their individual activity, so they can use their creativity and intelligence to improve them and become more effective. The leader, in this approach, is very much aware that any accomplishment will belong to the team, not to him/her alone. He/she will be keen on celebrating the excellence in everyone and praise the positive, while treating the negative in a constructive way, for improvement. Indeed this is something that fosters the birth of more leaders, at least in their areas.

Finally, why I see such a huge relevance of the balance between giving and taking: if you are a boss, your primary goal will be to take as much as possible from your collaborators in order to make yourself more of something: rich, powerful, famous… achieving, you name it. The problem is: we humans are not stupid. We know when someone is trying to exploit us more that collaborate with us or help us achieve. What bosses get, as a consequence, is the bare minimum due, nothing else. Such a pity for them. If you are a leader, you thrive when you see your people thrive, and you find gratification in their growth. The more you give, the more you get. And I am not just talking gratification and “sainthood”.

The world is a tiny place after all, I have come to learn, a place where you sooner or later meet again many of the people that you have left behind. Let me ask a simple question: taking this situation for granted, would you rather meet again, maybe in a position of power over you, someone whom you have exploited or someone that you have helped to develop and thrive? As you can imagine, I myself would rather meet the second. Luckily enough, it happens quite often to me to meet this kind of person, especially since I have become a better leader and one who gives more that he takes. I friendly recommend you to go for the same experience, and while you ponder which way to go I want to share this inspiring video with you.

Remember: life is full of stories of people who have mistreated someone that then they have met as a judge, a clinician, a minister, a policeman …. someone with a power over them. So let’s make, at least, a safe investment on our future by giving more than we take from the people we lead. We never know